Two DVDs we have produced.

“Knots Made Easy” was originally produced by Richard Phelan on VHS in the 1990s – we digitized the footage and produced this menu-driven DVD. 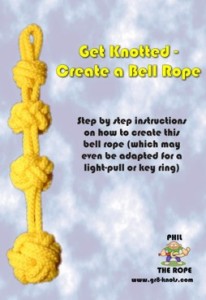 “Get Knotted – Create a Bell Rope” describes four knots in detail to create a simple bell rope/light-pull (or even key fob if tied in “small stuff”).